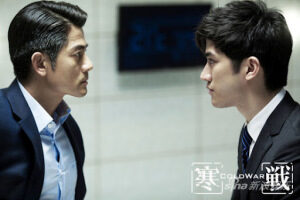 “Cold War” features an intense story of how police and robbers pitting their intelligence against each other. The plot centres on a police van which is hijacked by the criminals. As the rescue mission for the hostages fail, the lives of two police officers are lost. The hostage ransom is found missing as well. Suspicions arise if the hijacking incident is planned within the police force!

Aaron and Aarif – friends or foes?

Aarif plays an ICAC senior investigator who requests to investigate in the missing ransom. As the rescue mission fails, Aaron who plays the deputy police commissioner embroils in a fiery disputes with Aarif, who insists his ways to investigate the police force internally. The duo eventually became good friends and Aaron also invited Aarif to join his investigation team.

Revealing that this would be a rich and creative film, Tony said, “This is a refreshing type of police-robber action film. It is a film with message and persuasion. I believe the audience will love it. I also hope that the film will be injecting a new element and direction in the future Hong Kong crime thriller film amd opens a new direction.”

“Cold War” is scheduled to premier on 18 October 2012 in Hong Kong, China and in various countries.