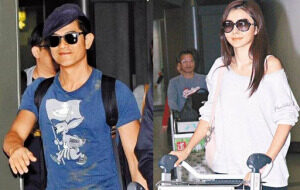 The relationship of Aaron Kwok (郭富城) and Lynn Hung (熊黛林) is an open secret although the couple have not officially declared their romance.

Last month, Lynn was photographed spending a night at Aaron’s house on her birthday. On 25 October which was a day before Aaron’s birthday, the couple was seen vacationing together at Maldives. There were talks that Aaron had planned for this ‘pre-honeymoon’ vacation to sweeten his girlfriend as he had delayed their wedding plans.

Aaron was in good spirits

Returning to Hong Kong yesterday, Aaron and Lynn did not proceed to the arrival hall together. Wearing a pair of shades and a cap, Aaron was in good spirits and friendly to towards the reporters.

Asked if it was a pre-honeymoon vacation, Aaron said, “You have such good creativity. It’s quite funny.”

When further asked if the couple had dived together, Aaron teased back the reporters, “You are so creative, how do you expect me to answer you? You guys have scattered around the airport like private investigators. We don’t even put in so much resources during filming!”

Lynn was shocked to be called Mrs Kwok

Lynn appeared 15 minutes later after Aaron had left. Pushing out the same type of luggage with Aaron, Lynn was all smiles meeting the reporters.

When grilled if it was a pre-honeymoon vacation, Lynn responded, “No no no. I have not read the news for days.”

Asked about the birthday gift she had given to Aaron, Lynn replied shyly, “Why don’t you ask him instead?”

She also declined to reply if Aaron had proposed to her. When a reporter addressed her as Mrs Kwok, Lynn was shocked, “Please do not call me that.”

As Aaron mentioned before that he would get married before the age of 50, Lynn was asked if she was willing to wait that long for him.

“It’s more important that we are happy now. Thank you everyone for your concern,” replied Lynn.