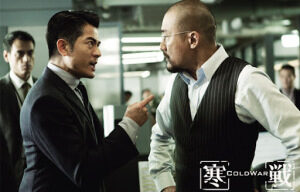 To present more realistic scenes, the four actors (Aaron, Tony, Aarif, Eddie)  in the film will dubbed their own voices in the Chinese version. The film was initially dubbed by voice artists, but the directors were not satisfied with the effects.

Speaking about the reasons why he asked the actors to dub their voices instead, Director Leung said, “Firstly, it provides a more realistic image as the actors had experienced the filming environment and the atmosphere. Secondly, it will increase the quality of the film.”

As some of the actors are not native Chinese speakers, the directors specially flew in professional voice artists from Beijing to teach the actors the accurate Chinese pronunciation and voice dubbing to portray different emotions.

Unlike previous Hong Kong crime thriller films, “Cold War” will focus on the internal strife between the top police officers. Both lead actors, Aaron and Tony praised the script and theme of the film.

Aaron said, “I was excited when I read the script. I was also moved by the creativity of our Hong Kong people. A new force has finally appeared.”

Tony also added on, “It’s been a long time since we see an authentic and local Hong Kong film.”

“Cold War” is slated to premier on 18 October 2012 in Hong Kong, China and in various countries.