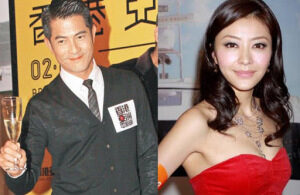 Rumours are rife that Aaron Kwok (郭富城) had successfully proposed to Lynn Hung (熊黛林) during their vacation in Maldives.

Returning to Hong Kong two days ago from their pre-honeymoon, the couple appeared to be in high spirits. As Maldives is a romantic destination for wedding proposal, there are speculations if Aaron had his wedding proposal there. The love birds were also spotted having a romantic candlelight dinner in Maldives.

During their holiday, Lynn’s elder brother posted on Weibo that he was sending his parents to the airport. The public was quick to assume if Lynn’s parents were off to meet up with the couple. After returning to Hong Kong, Lynn’s brother uploaded a picture of the parents praying at a temple. The Chinese believe to offer incense at the temples for joyous occasions and hence, the picture spark off rumours if Aaron have successfully proposed to his girlfriend.

Attending the Hong Kong Asian Film Festival 2012, Aaron was all smiles and looking joyously.
Asked if he and Lynn were advancing to the next stage of their relationship, Aaron replied, “I won’t speak, but it is so hilarioius to hear of a creative news.”
Aaron declined to reply if Lynn was tired after the trip and instead exclaimed, “I am in high energy! I am so happy when I get to work.”

When grilled if the couple had made a big leap in their relationship, Aaron responded, “Let’s not talk about this. I already told everyone that my birthday wish was not to discuss on my private matters.”

Aaron then beamed and chuckled before turning his head away.

Tony Leung teased Aaron: “There is saliva drooling from his mouth”

Aaron’s co-star in Cold War <寒战>, Tony Leung Ka-Fai (梁家輝) was tight lipped when grilled by reporters. Responding in humour, Tony said, “I am not that close to him, why will he tell me all these things? We are only brothers and won’t talk about unrelated stuff.”

However, Tony did not forget to tease Aaron and said, ”I see that there is saliva drooling from his mouth and you already know if he make it or not.”

When told about Tony’s teasing, Aaron was not offended and said to the reporters, “Haha.. He is so creative. The words can attract the readers. Write all you want.”

The heavenly king also added, “Whatever you write now, I will not mind. It doesn’t matter. It’s important to be happy and that my movie will be good.”