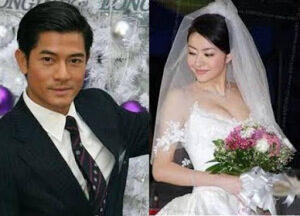 Aaron Kwok (郭富城) and Lynn Hung (熊黛林) were initially rumoured to tie the knot this year. However, Aaron had dismissed the wedding rumours. Recently, the heavenly king reportedly postpones his wedding plans two years later and intends to marry Lynn in 2014.

As his wedding delay may upset his girlfriend, Aaron reportedly will take Lynn to a vacation in Maldives so as to sweeten her. Although the couple has not openly admitted their romance, their relationship is an open secret in the showbiz.

Having been in a six-year relationship, it seems that Lynn has ascended to “Mrs Kwok” status. She accompanies Aaron along when he dines with friends and Aaron even introduces her to his friends.

Aaron has always been cautious to avoid media questions on his relationship with Lynn. However, at an recent public event, Aaron expressed that he also desired to have a family of his own although he emphasized that his career is still more important.

Asked what if Lynn could not wait for him to settle down, Aaron said, “It’s fate if that day cannot be materalized. If the fate is over, it’s pointless to insist anything.”

In August, Aaron expressed that he wished to attain a peak in his career and will get married before the age of 50. Without specifying any name, Aaron said, “It will be hard to the person close to me, but they will understand me.”

While Aaron has gradually opened up on his love life, Lynn has also gave clues on her blessful relationship. As her new movie, “Love is …. Pyjamas” will screen in October with Aaron’s movie “Cold War” , Lynn also helps Aaron to publicise his movie.

“The viewers can watch his intense and exciting film first then watch my comedy film,” said Lynn.

Lynn also let on that Aaron and she seldom watch movies together as they may run into paparazzi. She also disclosed that she would seek Aaron’s advise on acting.