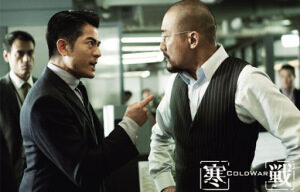 Both the film directors Longman Leung (梁乐民) and Sunny Luk (陆剑青) wish to present a film that “thinks out of the box” and differs from the classic crime thriller film.

Talking about the creativity of the film, Director Leung said, “The typical Hong Kong film describes how the police nab the criminals. They never explore deep into the bureaucratic system of the police force. What’s special about ‘Cold War’ is that it will develop from the power struggle of the internal force of the police.”

Besides boasting about the prolific actors in Asia, the film also hired a top-notch filming crew from Hollywood film “Batman”. To present more realistic scenes, the four actors (Aaron, Tony, Aarif, Eddie) in the film will also dubbed their own voices in the Chinese version.

Originally scheduled to premier in 18 October 2012, “Cold War” is now set to release in Hong Kong and China theatres in 8 November 2012.