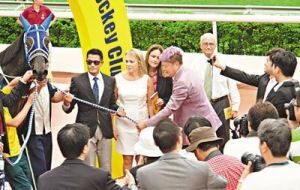 Despite being a first time horse owner, Aaron Kwok (郭富城) had a quick taste of success and won about HK $280,000 at the horse racing game yesterday. Although Aaron’s horse, “Calling for Love” made its debut appearance, it finished first in the race. Aaron was beaming with joy as a proud horse owner!

Yesterday, many Aaron’s friends such as Julian Cheung (张智霖) came to show support to the first-time horse owner. Upon hearing that Natalis Chan’s (陈百祥) horse was in the same race as his horse, Aaron felt that his winning chances were greatly diminished. However, he was surprised when his horse won the race.

Named after his song, “Calling for Love” , Aaron’s horse was in a top shape.

Recalling his nervous experience during the race, Aaron said, “Before “Calling for Love” was preparing to race, my heart was pounding non-stop. It’s like seeing my son in a competition. I am not that panicked on stage or filming, but today it is different. It is especially so when the horse raced in the last 200m. His performance is terrific and so surprising. He made me so happy!”

Aaron also praised the trainer for unleashing the potential of his horse. “He is like Bruce Lee flaunting his muscles. When I was watching at the stand, I already feel that my horse has the confidence of winning.”

Asked if he was disappointed that his girlfriend, Lynn Hung (熊黛林) was missing at the race, Aaron said, “If I had known that I would win, I would call all my friends, manager and colleagues to come.”

Although Lynn was not at the race, she watched the game at a cafe. She also supported Aaron by placing some bets and won a few hundred bucks.