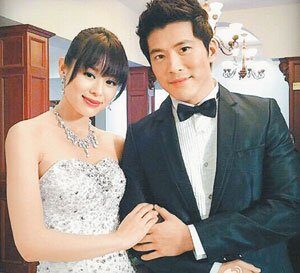 It was rumored that Myolie Wu (胡杏兒) broke up with her 8-year boyfriend Bosco Wong (黃宗澤) in order to accept her new love Eric Huang (黃少祺). While filming for mainland Chinese drama Jing Yu Man Tang <金玉滿堂>, Myolie and the Taiwanese actor, Eric reportedly became good friends quickly. Eric allegedly started to pursue Myolie, and was very attentive to her during the filming.

Myolie reportedly was disappointed and upset with Bosco Wong’s  flirtatious behaviour. Bosco and her also had different opinions about their marriage plans. After returning to Hong Kong, she allegedly sourced out new apartment to plan for her breakup. In June, she broke up with Bosco and allegedly expressed to Bosco that she could not tolerate his scandals with his co-stars.
When rumors of Myolie and Eric’s romance surfaced, Eric’s mother was displeased with Myolie. Media reports labelled Eric as the third party, and Eric’s mother allegedly objected her son to further developed his relationship with Myolie.

At a promotional event for his new movie, Eric also emphasized that he was single and was only working partners with Myolie. He also drew a clear boundary with Myolie by indicating that he had not been keeping in touch with her.