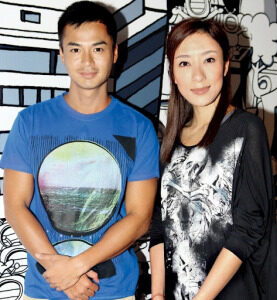 Although Tavia Yeung (楊怡) and Him Law (羅仲謙) had always denied their romance, the “car shaking” scandal has thrown some light into the couple’s relationship.

Apple Daily published a series of photos in which Tavia’s head was resting in between Him’s thighs for 40 minutes in a car and implied a tyrst between the couple. The next day, Tavia and Him immediately called a press conference to clarify the scandal.

Tavia explained that she was drunk and hence arranged for Him to pick her up. She also said that Him was the person she trusted very much.

“As I drank some wine, it was illegal to drive. I wished that someone whom I trust will send me home. As an artist, I do not wish to be photographed at my drunken state. I did lay on the thighs of someone whom I trust. There is absolutely no doubt about it,” said Tavia.

Gave clues of their relationship

At the press conference, Tavia and Him looked comfortable and at ease with each other. Saying that he should instead belt Tavia up or placed her at the passenger’s seat, Him said, “I am at wrong…..I should not allow her to lie on my lap for a long period of time.”

Upon hearing Him’s words, Tavia laughed and smacked him at the shoulder. Their light flirtation and hearty conversation subtly gave away their relationship.

Although Tavia did not admit their relationship outrightly, she implied that they were now getting to know each other and will let nature take its course.

Him Law admits in a relationship with Tavia

The couple was rumoured to be dating while filming The Hippocratic Crush . It is an irony that Him, being 5 years younger than Tavia, is also pursuing her in the drama. Although Tavia rejectes Him in the drama, Him manages to win her love in the real life.

Revealing the reasons on why he likes Tavia, Him said, “She takes care of her family well and has a strong sense of responsibility. She is principled towards work and herself.”

Although Tavia is 5 years older than Him, they get along comfortably with each other. Speaking about their age difference, Him said, “Age does not matter in love. It’s important to communicate well and have the same direction and goals.”

The couple is also rumoured to be living together. Dismissing the rumour, Him said, “I often go over to her place for meals and soups. I have seen her mother already, but we are not living together.”