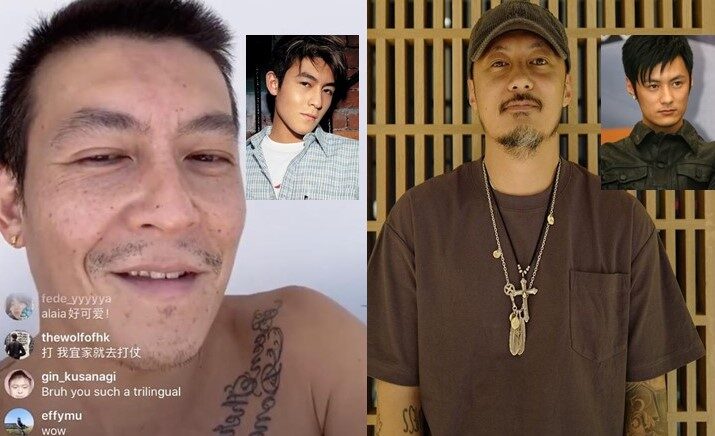 39-year-old Edison Chen recently held an Instagram Live to update his fans on his life. Sadly, all the attention he got was how much he had aged. During the live session, Edison did not use any beauty fillers and interacted with fans with his bare face.

Many fans were shocked with his appearance as there were wrinkles around his eyes, black spots and freckles on his face. One netizen said, “What happen to our heartthrob? Anyone would have believe if he says he is 50!”

When Edison started filming, his female fans used to swoon over his handsome looks. He was also considered to be one of Hong Kong’s “male god”. After his sex photo scandal in 2008, he retired from showbiz. Edison now has a three-year-old daughter named Alaia with his supermodel partner, Qin Shupei.

In the 90s, Daniel Wu is definitely one of the hottest actor in the Chinese film industry. With sharp facial features and a masculine body, Daniel attracted a pool of female fans.

Daniel is married to model, Lisa S. and they have a daughter, Raven. The couple currently resides in United States. Last year, a fan bumped into Daniel in the States, and posted their photo on the social media. Daniel’s receding hairline became a hot topic. Some netizens asked if the actor was balding.

Earlier, Daniel also posted a photo of himself when he was 16. He lamented, “I must be 16? I wish I had all that hair back.”

Shawn Yue and Edison Chen entered into the showbiz around the same time, and was often being compared.

When he was in his 20s, Shawn was very versatile and could take on a series of roles from being a cool guy to a Mr Sunshine. He was also the darling of advertising. Shawn has also cut down on taking filming projects, after he established his fashion label.

Shawn is now married with a son. In recent years, he has started to grow beard, and even his beard has started to turn grey. However, he still looks good despite the grey beard.

Nicholas Tse entered the entertainment industry as a singer, and he was dubbed as the “male god” in the Hong Kong music industry.

Nicholas has a good sense of business, and is well versed in investment. He set up a post production company, and has also ventured into China. 85% shares of his company was later acquired by a public listed company.

Known for his culinary skills, Nicholas also has his own food travelogue show, ‘Chef Nic’ (12道鋒味). He also ventures into food industry, and set up cookie stores, Chef Nic Cookies.

Nicholas has shown no sign of aging, and looks almost the same when he appeared on Chinese variety programmes in recent years. He has maintained his looks even better than female celebrities.