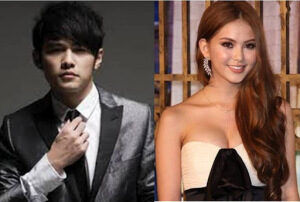 Tabloids claimed that Jay Chou (周杰伦) had proposed to his girlfriend, Hannah Quinlivan (昆凌) while vacationing in London.

Stating several times that he hoped to get married before the age of 35, Jay was afraid that he would have a communication gap with his future kids if he were to wed at a later age.

Jay also revealed before in an interview that he planned to propose to his future girlfriend at the London’s Ferris wheel. His recent trip to Europe was accompanied by his mother. As Jay is renowned for being a filial son, suspicions arose if he intended to let his mother witness his proposal.

Recently, Hannah also responded in an interview that age gap was not a factor in a marriage. The 19-year-old model said, “As long as I love him and he loves me. At a special moment, if he proposes to me, I will marry him regardless of his age.”

Jay’s recording company, JVR Music responded that Jay headed to London to shoot his music video only. Responding to his proposal rumour, his company replied, “You guys think too much.”