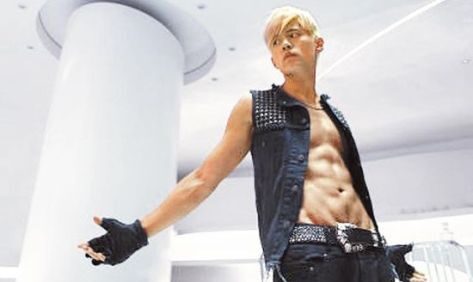 Days ago, Jay Chou (周杰伦) released photos of his album cover for his 12th album, 12 New Works . Flaunting his 8-pack abs donned with a golden hairstyle, many fans criticised his latest image for lacking creativity.

Netizens described Jay’s golden hairstyle resembling 2PM member, Jang Woo Young’s hairstyle in his album cover. Some even jibed at the Taiwanese pop idol and said, “Has the self-proclaimed music king turned into a Korean?”

Some netizens also felt that Jay’s image was identical to Kenji Wu’s (吳克羣) album cover in 2010, Love me Hate me <愛我恨我> with the latter also displaying his muscular body. One netizens mocked at Jay and wrote, “In the past, Kenji used to learn from Jay. Now, it is Jay’s turn to learn from Kenji. Hahaha!”

Jay’s fans expressed their disappointment with their idol for “following the fashion blindly”, and said, “I am speechless. You are so talented, do you need to sell your body?”

Although there are many negative comments pouring at the web discussions, there are still fans who show support to Jay’s transformed image. ”Even if you hate the image, does it have anything to do with good music,” asked a fan.

Jay’s recording company, JVR Music declined to respond on the criticisms on his latest image.