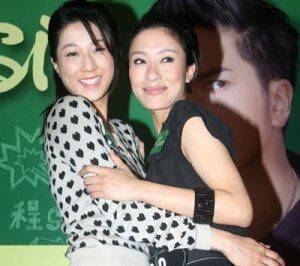 The announcement of the nominees for the 2012 TVB Anniversary Awards has led to many controversies. Ben Wong (黃智賢), Sharon Chan (陳敏之) and Raymond Cho (曹永廉) are surprisingly excluded from the nominations.

This year, Linda has four series (L’Escargot 缺宅男女, Daddy Good Deeds 當旺爸爸, House of Harmony and Vengeance 耀舞長安 and Witness Insecurity 護花危情 ) and Witness Insecurity is also the highest rating series so far. Hence, Linda’s fans felt that it was unfair to exclude Linda from the  ‘My Favourite Female Character’ category.

Asked if she was disappointed, Linda replied, “Yes, I did feel disappointed. I thought that all my four series had good ratings, and there would be some chances (of nominating) especially Witness Insecurity”.

Linda also urged her fans not to be unhappy about it as all the nominees worked very hard too.

Although Linda is nominated as the Best Leading Actress category, she does not have much confidence about winning the award. As Tavia’s good friend, Linda thinks that Tavia has better chances of winning.

“I feel that Tavia has higher chances of winning. I always like her acting skills and we are also good sisters,” said Linda.

Although Linda is left out from the ‘My Favourite Female Character’ award category, there is still something to cheer about for the actress.

Linda’s music album tops the album sales chart although it was launched only for a week. At a promotional event for her new album, many fans came in to support her.

Overjoyed with the sales of album, Linda said, “I like this album the most as it reflects my life better. It sorts of fulfil my wish of having a singing career”.
The joyous Linda also hoped that she could have her concert next year.

“My first concert venue choice is Kowloonbay International Trade & Exhibition Centre (KITEC). The seats are not too many and not too little. It’s just nice. I have not held any concert since I started my singing career four years ago. Now that I have recorded more songs, I hope I can hold my concert soon”.