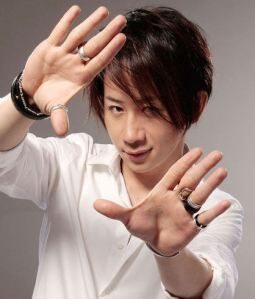 Taiwanese renowned magician, Lu Chen (劉謙) seems to hit the headlines for the wrong reasons these days. Earlier, he was blasted for an uncreative performance at the Golden Bells Awards. Shortly after, a video clip of his failed magic performance was circulated online.

Recently, tabloids claimed that the illusionist had two-timed his ex-girlfriend with a Chinese heiress.

Yesterday, Lu Chen was photographed to be dating a mainland model, Ariel Boo aka Wang Xiyi (王希怡). The couple was dining at a hotel with friends and proceeded to a coffee house where they only left at 11 pm. Lu Chen subsequently drove Ariel to a luxurious apartment where the couple entered into the apartment together, fuelling speculations if they are currently staying together.

Ten years junior of Lu Chen, Ariel is a model and a member of a pop group ‘Up Girls’. Ariel came from a wealthy background, in which her family owns the ‘Family Li Imperial Cuisine’. The famous restaurant chains have branches worldwide and offers imperial dishes from the Qing dynasty. The restaurants have served well-known celebrities, businessmen and politicians such has Bill Clinton, Bill Gates, Muhammad Ali and Jackie Chan.

Ariel reportedly is the third generation to inherit the wealthy businesses.

Lu Chen reportedly broke off with Hong Kong model-singer Renee Lee (李蘊) in July. However, there were already close photos of Lu Chen and Ariel in April, which was found on Ariel’s Weibo. At that time, Lu Chen had not broken off with Renee and the latter also brought her family to watch Lu Chen’s magic show.

Renee Lee: “I will be wary of people the next time.”
15 years junior of Lu Chen, Renee was composed when told of Lu Chen’s new relationship. “He has nothing to do me now,” said Renee calmly.
Asked if a third party had caused their breakup, Renee said that she was not sure but mentioned that friends had asked her to beware of Lu Chen.
“My friends heard that he (Lu Chen) was very flirtatious, but love is blind. I chose to believe him at that time,” said Renee.
However, Renee added on, “I will be wary of people the next time and will find a boyfriend who can give me security. I will be happy and I hope that he will treat that girl well too.”
Source: orientaldaily
This article is written for Asian Pop News. Please do not repost this article on other websites. Please credit if any contents are taken from Asian Pop News.