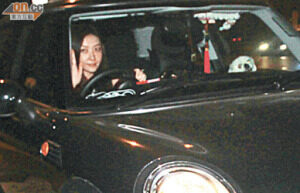 Lynn Hung (熊黛林) who turned 32 on 10 October was sighted driving to rumoured boyfriend, Aaron Kwok’s (郭富城) apartment a night before her birthday.

Arriving at her boyfriend’s apartment building with her beloved dog, the security officer seemed to recognised Lynn and allowed her access into the building. Spotted on her finger a three-carat diamond ring from Aaron, Lynn was all smiles when she saw the reporters. Lynn also seemed to have the keys to Aaron’s apartment when she drove straight into the apartment building.

Within five minutes, the heavenly king arrived and was friendly to the reporters, waiving at them.

A happy and sweet birthday

After the midnight, Lynn uploaded on Weibo a picture of herself, making a wish in front of a birthday cake. She wrote on her micro-blog, “Happy! Sweet!” Some eagle-eyed netizens pointed that Aaron was the photographer as they could see his vague reflection in the picture.

Lynn reportedly left Aaron’s apartment the next day at around 2.15pm. She was also spotted to have change her clothes.