Myolie does not mind working with Bosco again 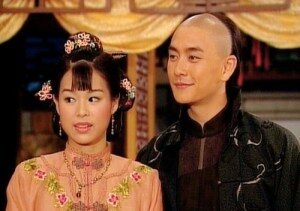 TVB originally planned to film War of In-Laws 3 <野蠻奶奶3> next year. However, the drama was shelved aside due to Bosco Wong and Myolie Wu’s breakup. Myolie allegedly did not wish to co-star with Bosco in the same drama.

At a radio interview yesterday, Myolie was asked by Nancy Sit (薛家燕) if she would mind working with Bosco in War of In-Laws 3.

Myolie replied, “Is that true? I have not heard anything on the drama. As it is only work, I do not mind at all”.

Nancy was then asked if she wished to act as the mother-in-law in the drama. Nancy said that it was better to leave the role to Liza Wang (汪明荃). Myolie said, “You can be the other in-law!”

Nancy jokingly said, “I will then bring Bosco back and help you to deal with him!”

Myolie laughed after hearing Nancy’s words, and said, “You are so naughty!”

Chilam wants to be match-maker

Asked if her friends had introduced any men to her, Myolie said, “Chilam Cheung is always showing me his friends’ photos from his phone, but I have not met any of them in person. He is just concern and worried about my current status”.

“I feel that it’s fine to know more friends. It doesn’t necesary have to be dating. I can use this period to settle down. My last single status lasted for ten months. Let’s see if I can break the record this time,” said Myolie.

Although resuming her single status, Myolie is not worried about spending Christmas alone this year. She shared that she would be celebrating the festive season with family and friends.