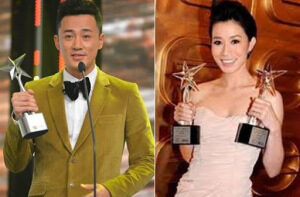 2012 TVB Anniversary Awards is buzzing with excitement! The one-person-one-vote for TV King and TV Queen capture everyone attention as the awards are more participative this year.

Apple Daily is currently running its one-person-one-vote poll and it serves as an indicator to the anniversary awards.

For the TV King category. Raymond Lam is currently leading the online poll and win 22% of the votes. Yesterday’s voting results show Bowie Lam taking the second spot with 18% votes and Kenneth Ma in the third spot with 16% votes.

However, the Hong Kong Golden Forum members have rallied to vote for Kenneth instead as Damian Lau is unable to gather the mass votes to win Raymond. Today’s results take a turn, as Kenneth climbs up to the second spot and win 18% of the votes.

Responding to the netizen’s support, Kenneth said, “I really have to thank them. I am already happy that people are voting for me. I also hope that more votes will narrow the gap in the final results. It’s not that I do not have confidence, I am taking it in my stride”.

As Bowie is not being nominated in the TV King this year, he is happy that viewers are voting for him. Asked about being omitted from the nomination, Bowie said, “I did not even sign a per-series contract so it’s hard to blame people. Justice is in the heart of people”.

As for the TV Queen category, Charmaine Sheh is leading the poll by a big gap (38% of votes) despite not a TVB contract artist.

In a tele-interview, Charmaine said, “I am so happy and very touched. The viewers have not forgotten When Heaven Burns and my character Yip Chi Yan. I never expect that last year’s drama is still remembered. I am grateful to everyone that vote for me”.

Kate Tsui initially was trailing behind Charmaine on the first day of the poll, but Linda Chung’s fans have rallied to support her. Today’s results take a turn as Linda climb to the second spot and take in 17% of the votes. Kate slides to the third place, taking in 13% of the votes and Tavia Yeung remains at fourth place with 12% votes.

Asked about the voting results, Linda said, “Charmaine has already elevated to the ”god” status. She can manage any roles. I hope that I can be like her one day”.

It remains early to see if the online poll will reflect the actual results of the TVB Anniversary Awards but the poll is widely seen as an indicator.

However, fans outside the Hong Kong region can also vote for your favourite artists in the Apple Daily TV poll at: http://tv-voting.appledaily.com.