Raymond Lam plays a dashing cop in “Highs and Lows” 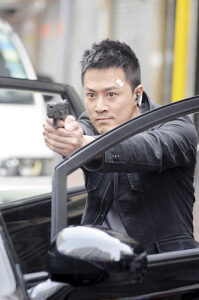 During an investigation, Raymond develop feelings for his informer, Kate. As Kate feels inferior over her background, she withdraws from the relationship. On the other hand, Raymond’s colleague, Ella also has a liking for Raymond, hence the trio develops a complicated love triangle. Kate eventually becomes a formidable drug queen and poses a threat to the police. Casting aside his heartbreaking love, Raymond joins forces with Michael to nab his old love.

In “Highs and Lows”, Raymond plays a cop the first time. Unlike his previous roles where he played a refined gentleman, he plays a rugged cop and even worked out his muscles specifically for the drama. Despite playing a cool-headed cop, Raymond will still look dashing and charming!

There were talks that Kevin Cheng (鄭嘉穎) and Roger Kwok (郭晉安) were initially cast in the drama, but were replaced by Raymond. This lead to speculations if TVB intends to increase Raymond’s chances of winning the TV King title.

As this year TVB Anniversary Awards is likely to be voted by public, Raymond’s dashing and refreshing role will enhance his chances of winning the TV King award. “I always like public voting. This is the most direct, simple and fair method of voting. This year, I have two dramas, “Three Kingdoms RPG”  and “Highs and Lows”. I am satisfied with my performances so I feel that I can account to my fans.”