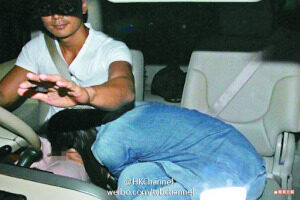 Apple Daily published a series of photos in which TVB actress, Tavia Yeung’s (楊怡) head was laid in between the tighs of her rumoured beau, Him Law (羅仲謙) for 40 minutes.

According to the tabloid’s report, Tavia boarded a taxi with her friends at about 1.30 am three nights ago. Tavia alighted at a street and boarded on Him’s car, which is owned by Tavia. The car was unusually driving at a slow speed of 30 km/h. When the car was trailed for 30 minutes, Tavia was visibly missing.

When the car was stationary, the paparazzi went forward and spotted Tavia inside the car with her head knitted in between Him’s legs. When caught, Tavia refused to lift up her face and used her hands to cover her face. Him was visbly shocked and tried to stop the paparazzi from taking further pictures.

Him drove back to Tavia’s apartment after circling around for a while. Tavia had already tidied her appearance and wore a cap when they reached her apartment building. Looking very embarassed, Apple Daily claimed that Tavia’s lips was wet and kept wiping off the unknown substance from the lips.

Tavia and Him to take legal action

Yesterday afternoon, Tavia and Him held a press conference under the support of TVB top executives and management agent. Expressing that the scandalous news had tarnished her reputation, Tavia was considering to take legal action against the tabloid.

At her Weibo, Tavia wrote, “Why didn’t you write the truth and instead fabricate the news? Where is your consience?”

Tavia also indicated that she broke down upon reading the scandalous report but decided to face it and clarify the incident to the public.

Tavia admitted asking Him, a person she trusted, to pick her up after having too many drinks at the dinner. After alighting from the taxi, Tavia vomitted severely and had to be assisted by Him into the car. Tavia also confessed that she had lied down on Him’s legs after getting in the car as she was already drunk.

When the couple reached Tavia’s apartment, Him immediately woke Tavia upon spotting the paparazzi. As she did not wish to be photographed at her drunken state, she immediately wore her cap. After sitting up, Tavia continued to vomit again and hence her lips was wet.

“An artist is also a human. I know what are basic ethics and will not do something that is of a illegal behaviour. I am sure everyone understand how some private moments are supposed to happen.”

Asked about the photos which showed her wet lips, Tavia replied, “I am not afraid. Why don’t you ask them to show the photos. I don’t mind as I did not do it at all.”

Stating that he had mishandled the incident, Him said that he should have assisted her to sit properly or placed her at the passenger seat. He explained that he was worried of Tavia’s discomfort and hence allowed her to lie on his lap in a long period of time. Tavia then giggled and patted him.

Tavia and Him hinted their relationship

33-year-old Tavia and 28-year-old Him’s relationship is an open secret. Athough the couple never admit their romance, this incident has shed some light into their relationship.

At the press conference, Tavia emphasised several times that Him was a person she trusted. She said that they were getting to know each other and would not rule out possiblity of developing a romance together. She also revealed that Him took good care of her and doted on her.

Him also praised Tavia for being a good woman and promised to take care and protect her. He will develop his relationship with Tavia positively.