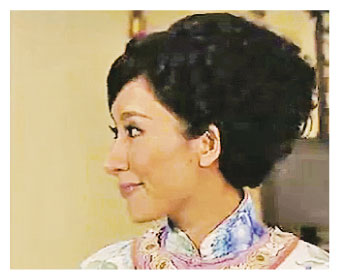 The premier of TVB anniversary drama Silver Spoon, Sterling Shackles <名媛望族> was aired with much anticipation on Monday. Touted as the blockbuster drama of the year, the drama revolves around an influential family and women tussle within the household.

Playing a peking opera singer and the fourth wife to Damian Lau (劉松仁), Tavia Yeung’s (楊怡) performance is eagerly anticipated by the viewers. Breaking through from her previous roles, she has many intimate and kissing scenes with the veteran actor in Silver Spoon, Sterling Shackles.

After the premier of the drama, her ‘Pinocchio’s nose’ is a talking point at the online forum. With a pointed nose, Tavia is rumoured numerous times that she had undergone plastic surgery to enhance her nose.

Many netizens discussed that her nose was too distracting as it stood out too much on the screen. Instead of focusing on the plot, most of the netizens discussions were on Tavia’s nose. Some netizens even mocked and suggested changing the drama’s title to ‘The prominent ladies looking at the nose’ .

As Tavia is a strong contender for the TV Queen title, viewers have high expectations of her breakout role in this drama. However, viewers have expressed their disappointment after watching the premier and expressed that Tavia’s acting was mediocre.

Newcomer Rebecca Zhu (朱晨麗) who made her debut performance in the drama was also criticised for her stiff acting. The 2011 Miss Hong Kong was also mocked by netizens for her poor Cantonese.