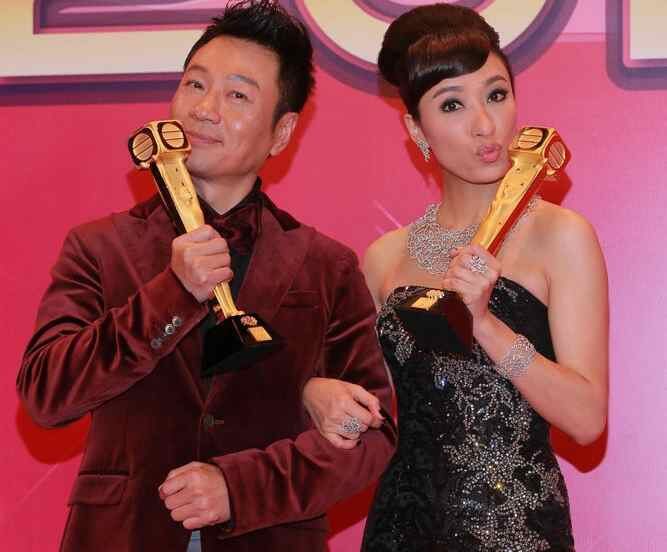 Newly crowned TV King and TV Queen are finally out!

2012 TVB Anniversary Awards marks a significant moment for the winners of the Best Leading Actor and Best Leading Actress. The TV King and TV Queen titles are bestowed by the Hong Kong viewers as they are entirely voted by the public.

Wayne credited his luck for winning the award, “I return to TVB for 10 years. How many ten years do a person have in his life? Thank you Ms Catherine Tsang for bringing me up the stage. I hope that I can share my honour with the three important persons in my life – My wife, my son and my mother”.

Winning the award with more than 110,000 votes, Tavia was very emotional on stage and screamed out loud. She expressed that her ten years road in showbiz was tough but never at once gave up. Tavia’s rumoured boyfriend, Him Law was teary upon seeing her receiving the award on stage.

Kenneth’s doctor role in The Hippocratic Crush won him My Favourite Male Character. While expressing his acceptance speech, he was too emotional that he was choked for words. He said that he would not mind winning this award every year.

Kate’s drug queen role in Highs and Lows won her My Favourite Female Character. Receiving the awards from Kevin Cheng and Myolie Wu, Kate said that she was disliked by many viewers in the past. The word “favourite” was not something she could relate to. “I never expect that I can win this award,” said Kate.

Bagging the Best Supporting Actress at the recent Astro Award in Malaysia and Asian Television Awards in Singapore, Nancy Wu won the award again for the third time in a row. Playing a mute boxer in Gloves Come Off, this character has indeed brought her recognition.

Koo Ming Wah’s ‘So Gay’ role in Divas in Distress has received rave reviews from viewers. Edging out Power Chan, Ming Wah’s was very emotional on stage. He thanked the producer for bringing him out from the dubbing studio and gave him a chance to shine.

Playing husband and wife in L’Escargot, Oscar and Mandy won the Most Improved Actor and Most Improved Actress. Oscar was thrilled when his name was called and thanked his bosses and colleagues on stage. Thought of giving up his acting career before, Oscar thanked his family and his girlfriend for their encouragement.

Receiving the award on stage, Mandy thanked her bosses and producer for the opportunities that they have given her. She also thanked her family for their support.

Best Variety Programme: From Here to There