“Young and Dangerous” poster blasted for being too gay 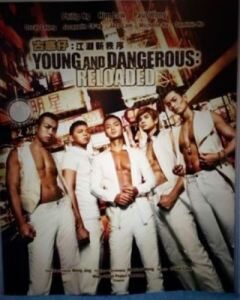 When Director Wong Jing (王晶) announced the remake of 1996 classic movie, “Young and Dangerous,” it created a hype over the triad theme movie again.

Although Ekin Cheng (鄭伊健) and Jordan Chan (陳小春) were the iconic figures in the movie, the duo is left out from the new version. Replacing them will be Him Law (羅仲謙), Oscar Leung (梁烈唯), Sammy Shum (沈震軒), Jazz Lam (林子善) and Philip Ng (伍允龙). Him will play Chan Ho-Nam and Oscar will play chicken in the film.

Although the movie is still in the midst of filming, the publicity poster has already been exposed in the 17th Busan International Film Festival and on various websites. However, the poster has been heavily blasted by netizens for having a strong gay flavour.

Dressed in all white outfit, the key characters such as Him, Oscar and Philip revealed their muscular chests. Some netizens criticised that the poster was not being realistic and wrote, “How would the triad members have such big chests? In real life, everyone is so skinny!” Some netizens also slammed the poster for lacking creativity.

Director Wong revealed that Gigi Lai’s (黎姿) character, Stammer (小结巴) would not appear in the film. Instead, Mainland actress, Hu Ran (胡然) will have a romance with Him Law in the film. As it will be a category III film, the remake will feature daring bed scenes.