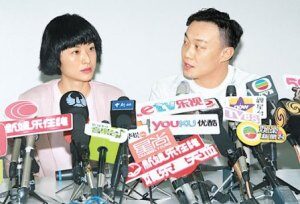 Yesterday, Eason Chan (陳奕迅) and Hilary Tsui held a press conference to dismiss the scandal. Photos were produced in which the group including Hilary, Josie, Sam, Grace and LMF were in attendance to celebrate a friend’s birthday at Kenny’s restaurant.

The photos showed that the group was sitting together for a meal and it was a stark contrast of the rumoured drug party. As it was rumoured that the drug taking footage was recorded from the CCTV in the VIP room, the photos produced did not show any CCTV installed in the room.

Eason: “Do not harass my daughter”

At the press conference, the couple urged the media not to harass their daughter. Eason said, “We reserve the right not to make any respond. If you do not get any responds from us, please do not go to the school and harass my child”.

Hilary said, ”I feel very innocent and helpless now that the matter has progressed to this stage. I always do not think that it’s necessary to respond to things that are unproven or not true. The reporter can call me for my respond, but please do not run to my daughter’s school and ask for her respond”.

“Furthermore, I did not avoid the matter. I just do not see the need to respond to a fabricated report but it doesn’t mean that I did it,” added Hilary.

Rumours surfaced that Eason and Hilary’s marriage was on the rocks due to the scandalous report. Stating that their relationship is going on strong, Eason said, ”We did not feel unhappy over such fabricated reports. Although it sounds mushy, but I want to say that we are still very loving. Those reports are not true”.

Asked why she posted Kenny Wee’s photo via instagram, Hilary said, “Why did I post? It’s posted by my friend and it has nothing to do with me. That is my private account too. You have to ask Edison Chen (陳冠希) instead”.

Under the presence of their lawyer, the couple said that they would take the following action:

The couple will also seek police assistance on the following matters:

Evidence had not been produced

On the other hand, Kenny reportedly had not produced the crucial evidence of his ex-employee’s video clip and the rumoured CCTV footage to the police. The police are unable to take further action currently and can only process it as a piece of crime information.