Eric Tsang: “My mood is affected by a barking dog!” 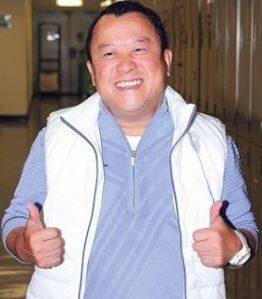 At Karman Cheng’s (鄭嘉雯) wedding, a drunk Eric Tsang (曾志偉) was rumoured to slap Kenny Wee (黃浩) for blowing up the drug scandal. Kenny reportedly made a police report against a male artist who assaulted him.

Several guests who attended the wedding all supported Eric and said that there was no commotion during the banquet. After the incident, Eric declined to make any comment until he turned up at a variety programme rehearsal at TVB yesterday.

Appeared to be in high spirits, Eric greeted the reporters with his signature smile. Responding on the slapping rumour, Eric replied, “I can’t comment anything as someone had made a police report. I cannot speak about what happened that night”.

Being the president of the Hong Kong Performing Artistes Guild, Eric was asked if Eason Chan (陳奕迅) had asked for his assistance in the drug scandal. “He called me after he finished his press conference and said that he would be travelling to Shanghai. I will be back to work and I said let’s do our own thing then”.

Story of an excessive barking dog

When asked if his spirits was dampened by the incident, Eric suddenly narrated a story on a dog which barked excessively.

“Recently, my mood is badly affected by a neighbour’s dog who has been barking continuously every night and everyone in the village is complaining. That owner said his dog was very sharp and will bark upon seeing thieves or ghosts. I said that the security here is good and there won’t be any thieves. He insisted that there were, if not there would be ghosts around”.

“Two nights ago, I was curious and checked out his place. There was no thief or ghost. The owner then pulled the dog out and finally revealed the truth that his dog was blind and could not see anything”.

“That dog does not need any food and lives on eating poop, so everyone forgive it. Hence, I am late these few days because of this. I have finished my story”.

Kenny Wee did not see the video footage

“I did not see anyone doing anything illegal at my restaurant. If there is, I will not condone it”.

Kenny added, “Regarding the rumour in which a person had used his phone to record a video clip, I can’t confirm the identity of that person. That person only extorted money from me through a third party. Why will I want to buy that clip?”

Kenny also said that the scandal had blown out of proportion and he was worried for his family safety.