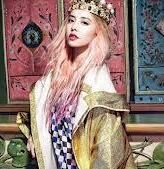 The concept of “MUSE” symbolises the combination of arts and pop music. As the Renaissance originated from Europe, Jolin’s album cover was shoot in France. Some photos were even taken at the Musee des Arts Fortains, a French arts museum.

Jolin’s music videos “The Great Artist”  and “The Wondering Poet” also encompass strong arts culture, be it the background, props, dressing and even her hairstyle. “I feel that arts is a form of experiencing life. If there is an idealogy and creativity, it is considered a piece of art. Painting, music, dance and filming are all arts,” said Jolin.

Speaking about her title song, “The Great Artist”, Jolin said that it was an encouragement song for all women not to bow down to flirtatious men. “Do not be vulnerable and do not let him be flirtatious and have that sort the artist arrogance. However, an artist can also be positive.”

“The Great Artist” music video currently has more than 2 million hits on Youtube despite only uploaded in a month! The music video was also nominated in the 2012 MTV Europe Music Awards.

Biggest challenge in the album

Jolin is very involved with her new music. She participated in selection of songs and lyrics, music arrangement and tracks sequence. Her biggest challenge is said to be the music arrangement, as she needs to listen very carefully and communicated with the producer the music direction she wanted.

Jolin will be celebrating her 32nd birthday on 15 September. She refused to disclose what gift will her rumoured beau, Vivian Dawnson give to her but said that she would be performing in a concert on her birthday instead.

Asked about her birthday wish, Jolin said, “My birthday wish is very simple. I hope that I can live a practical life, healthy and be happy everyday. This will be quite a good birthday wish.”