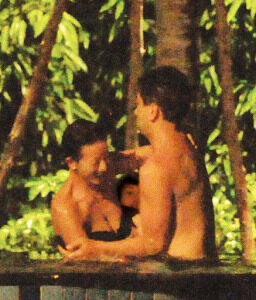 On 16 September, the married Toby was photographed having a pool party with her male colleagues – Ron Ng, Stefan Wong (黃長興), Quinn Ho’s (何君誠) and a few working crew. Wearing a bra top bikini, Toby revealed her 35D busty figure and was seen in a scuffling game with Ron.

The pair happily “attacked” one another and had physical contact with each other. As Toby displayed her cleavage in a strapless black bikini, Ron was overheard saying, “You have a good nutrition, it’s so difficult not to have any response.”

Oblivious of Ron’s words, Toby continued to play with Ron. At one point, she was photographed hugging Ron and then carried him into the water.

After the scuffling game, Ron suggested to play a stripping game. “Whoever strips his trunks, I will treat him like my brother,” said Ron.

Ron and Toby watched the group playing the stripping game at a corner. Stefan was photographed lifting up the former contestant of Mr Hong Kong, Quinn’s trunks.

After that, the group played a finger guessing game. When Ron lost the game, he tried to escape the drinking punishment by attempting to run to the restroom. Ron was blocked by the group who asked him to release himself at a pool nearby. Ron reportedly followed his friends’ order and contaminated the pool!

After a few hours of partying, the hotel guests lodged complaints on the noises from the pool. A hotel staff walked in and requested the group to leave the pool. Tabloids claimed that Ron and Toby held hands when leaving the pool.

Before the pool party, Ron was photographed patting the head of Toby after she returned from a swim. When reporter showed Ron the picture, his eyes rolled big and said, “Oh this.”

Ron touched his head and continued, “This was a way of showing my concern. It’s similar to how an elder brother will treat his sister.”

When grilled of his intimate behaviour with Toby, Ron replied, “Your photos only captured an action. It’s unfair to judge us by looking at the photos!”

Ron insisted that Toby and he were good friends and Toby always had a mischevious character. “Everyone knows we are good friends. I am in the wrong too. I shouldn’t treat her like a man and play with her like this.”