Oops! Jolin Tsai accidentally exposed herself during a dance 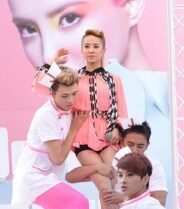 Two days ago, Jolin Tsai (蔡依林) was having a promotional event for her new album “MUSE.” Dressed in a vibrant pink short dress, Jolin accidentally revealed her undergarment during the dance.

While performing for an upbeat song, “Dr Jolin,” Jolin’s dancers accidentally exposed her girdle when lifting her up. Jolin was visibly shocked and immediately pulled down her dress. Jolin’s face turned red and tried to control her giggling during the dance. However, the pop princess was professional and regain her composure, eventually completing her song.

After the show, Jolin even jokingly said, “I know that the photographers were waiting for this moment!”

Explaining the unintentional exposure, Jolin said “As the dancer did not lift me up properly, my girdle was exposed outside. I felt so embarrassed!”
Source: ent.sina.com, ettoday.net