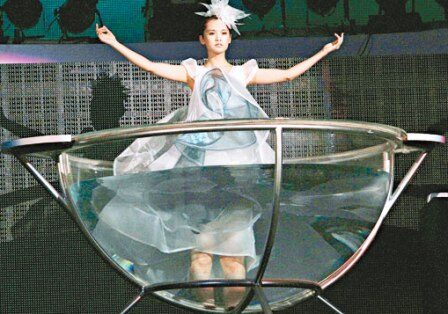 Rainie is holding her ‘Love Voyage Tour’ for three nights in Hong Kong. Speaking with a mixture of Cantonese and Chinese, Rainie also delighted her Hong Kong fans singing Cantonese songs. She also impressed the audiences, performing a series of acrobatic stunts such as singing in mid air and performing a song while hanging upside down.

Known as a cutie pie in the music scene, Rainie shedded her cutesy image and dressed sexily during the concert. Dancing along up tempo songs, Rainie had to adjust her bra during the performance. “I feel that my bra is falling off! It’s so dangerous,” exclaimed Rainie.

Rainie’s riskiest stunt was when she had to plunge into a water tank and submerged underwater for 20 seconds. After singing the last song Self-inflicted <自作自受>, the screen displayed words, “Thank you for accompanying me on this journey. We have finally returned to the silent world”.

Rainie then submerged into the water and undressed into a white closely knitted swimming costume. After getting up from the water tank, the crew quickly wrapped her with a towel. Sharing her experience performing an underwater stunt, Rainie said, “I heard cheers from the audiences. I finally know why performers can cry in the water!”

The 28-year-old singer also talked about her thoughts on romance on stage. Appearing to disclose about her love life, Rainie said, “My love life has always been mysterious, but I believe that when I find my happiness one day, you will give me your blessings. Am I right? If there is an anonymous friend who appear one day, you will accept it right?”

Coincidentally, Rainie’s rumoured boyfriend, Show Luo also made a guest appearance at her concert on the second night. He was all praises for Rainie, and exclaimed, “Does she need to perform so fiercely?”