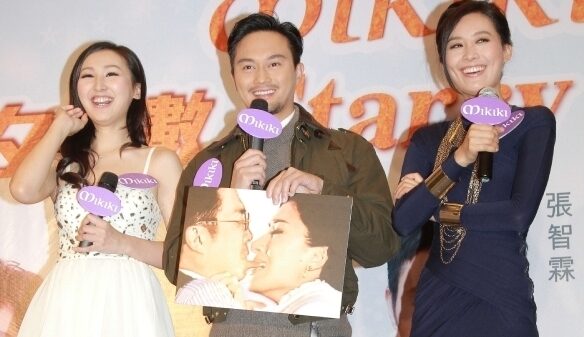 Many TVB artistes usher into the new year attending various celebrations and yes, busily making money at the last day of year 2012! While celebrating the new year, the various artistes also marked their new year resolutions for 2013.

After speaking up for Eric Tsang on his assault case, Oscar Leung was sued by Kenny Wee for defamation after saying that the restaurateur had “persecutory delusions”. Oscar declined to comment on the case and said that it was currently handled by his lawyer.

Speaking about his new year’s resolution, Oscar said, “Hope that next year will be better and the society will be more harmonious. I also hope for a healthy body and earn more money at the same time”.

Earlier, Raymond Lam announced that he would quit showbiz eventually to help out his family business. Regarding Raymond’s future intention, Wayne said, “Raymond has a hard time. He needs to juggle between drama, movie and singing and has to return to China to film dramas. His work is even more exhausting than mine. I understand where he is coming from”.

Wayne also said that he had not gone for a holiday in the past ten years and had grumbled to his wife of retiring from the entertainment circle. “Sometimes it is so exhausted that I told my wife that I want to retire. I also had depression before, but I am only joking!”

Asked about his new projects in 2013, Kenneth said, “I will film The Hippocratic Crush <On Call 36小時> sequel in the new year, but filming will start after the lunar new year. Hence, I will seek more money making opportunities in the meantime”.

Kenneth also shared that The Hippocratic Crush sequel will have more new cast such as Lawrence Ng, Eliza Sam and Koo Ming Wah.

There are rumours that TVB plans to groom Kenneth to succeed Raymond’s position after he leaves showbiz. Responding to the rumours, Kenneth said, “It will be a pity if Raymond leaves. He still has a long way to go. I have not heard anything about grooming me. TVB is a big company and it will groom many artistes too”.

When asked if he had plans to meet up with his rumoured girlfriend, Rebecca Zhu, Kenneth said that he would return home to rest after he wrapped up his work in new year’s eve. The 38-year-old also said that earning money was more practical and hoped to buy a new apartment for his family.

Asked if she would urge her rumoured boyfriend to earn more for their marriage, Tavia replied, “If that’s the case, everyone has to earn more money!”

Fala is the godmother of Chilam and Francis!

At the new year countdown event, Chilam Cheung exposed that Fala Chen’s new nickname was godmother! Chilam said that Fala was very caring towards the production team and took good care of everyone during the filming of Triumph in the Skies 2 in overseas. Hence, Francis Ng started to give Fala a nickname – godmother.

“I am the youngest in the team and really do not dare to take up the name. I work like a labourer!” said Fala.

Fala also said that she was pleased with her work in 2012 and has many projects on hand in the new year.